Apple and Uber employees the most confident, while Intuit, SAP and Adobe the least confident.

Data privacy is one of the biggest issues facing tech companies today. Apple CEO, Tim Cook stresses his focus on data privacy, with their most recent iPhone advertisement declaring “Privacy matters”. Google CEO, Sundar Pichai criticized Apple in his op-ed piece in the New York Times last week stating, “privacy cannot be a luxury good” that is only available to “people who can afford to buy premium products and services.” The tech industry had been under scrutiny for numerous privacy scandals, and more people are asking for large tech companies to have tighter regulation and/or to break up tech giants to diminish their power.

A recent Blind survey revealed that only 11% of tech employees trust Facebook with their data, while over 75% of Facebook employees stated they trust Facebook. So how do employees actually working at these large tech companies think about their own internal policies on customer data privacy?

We asked our users to answer the question: I believe protection of customer data is a top priority at my company. They could answer with four options: ‘Strongly Agree,’ ‘Agree,’ ‘Disagree,’ ‘Strongly disagree’. The survey ran from April 26 through May 3, and was answered by 10,664 users of the Blind app. Users could only answer once.

Here’s what we found: 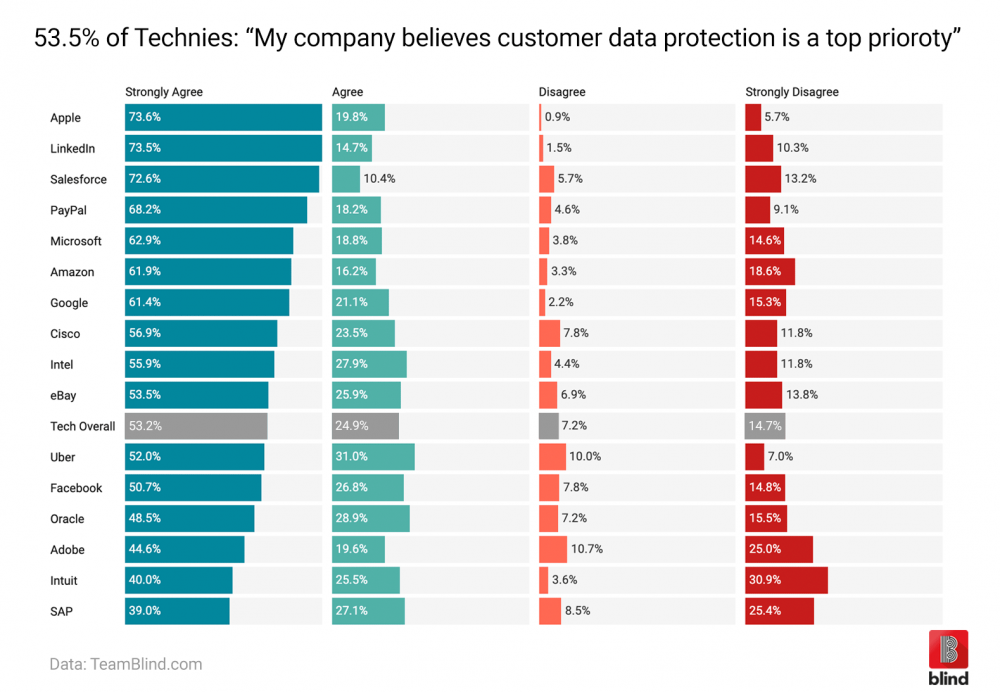 We also took a look at the results broken down by companies with at least 100 employee responses. Here’s what we found:

Tech employees are constantly discussing and raising issues about data privacy and workplace issues on Blind. Below are a couple of user posts:

At Blind we’re on a mission to bring transparency to the workplace. Transparency results in voice and voice results in change, often for the better. That’s why we created Blind, an anonymous social network for the workplace. Our user base includes over 50,000 employees from Microsoft, 36,500 from Amazon, 14,500 from Google, 11,300 from Facebook, 9,800 from Uber, 8,500 from Apple, 6,300 from LinkedIn, and 5,200 from Salesforce, just to name a few. With such a large user base of tech professionals, it makes it easy to quickly poll these employees about important and popular topics, such as this.