On January 2nd, The Washington Post reported that Amazon has threatened employees who were speaking out against their employer’s environmental policies with termination. In the Blind community, we started seeing mixed reactions from Amazon employees about their company’s attempt to silence those who are speaking out about climate change.

“For a long time, Amazon refused to publish anything related to its carbon footprint and make any substantial goals related to it. Only as a result of internal employee activism did Amazon make public announcements – in fact, they did this literally the day before the September 20 climate strike (have contacts internally who have confirmed that there was internal pressure to make headway directly as a result)” – anonymous Amazon employee

Do you think Amazon employees who have spoken out against the company’s environmental policies deserve termination if they continue to speak out? (Yes/No) 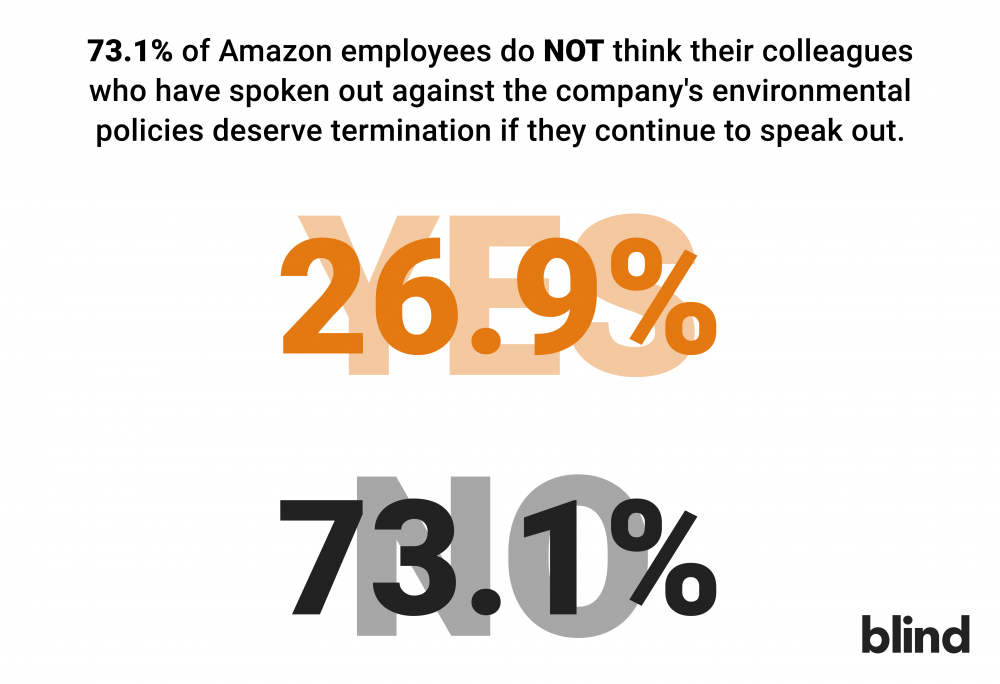 Two weeks later, Microsoft made a bold pledge that they will not only be reducing emissions but will be carbon negative by the year 2030, and announced a new $1 billion Climate Innovation Fund “to accelerate the development of carbon reductions and renewable technologies.”

With two of the most valuable tech giants approaching climate change so differently, and Amazon employees remaining so supportive of environmental activist colleagues, we naturally raised the follow-up question: do climate change policies affect one of the most critical areas in their business: the competition for talent?

We surveyed a broader audience on Blind about their company’s climate policies with the following questions and broke down the results by companies (1/2/2020-2/1/2020, 2,615 responses):

Q1. Does a company’s efforts towards tackling climate change affect where you want to work? (Yes/No)

Q2. Are you satisfied with your current company’s climate change policies? (Yes/No)

-Surprisingly, 48.5% of professionals say a company’s efforts towards tackling climate change affects where they want to work.

-Microsoft employees (80.7%) are most satisfied with their company’s climate change policies, Uber employees (37.3%) are the least satisfied. 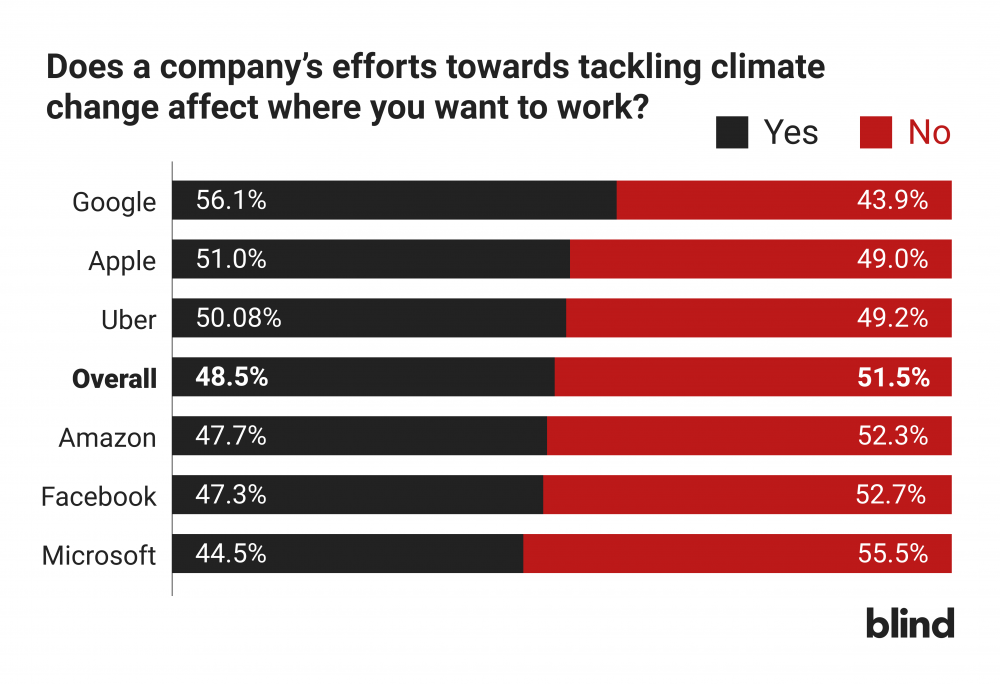 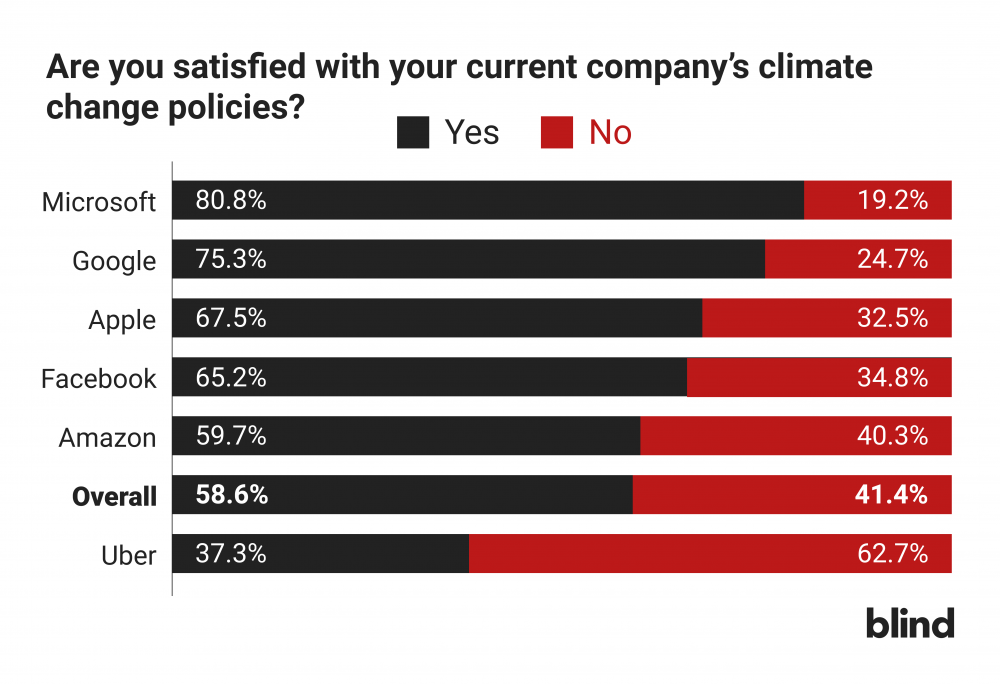 Blind is an anonymous professional network where people discuss work matters. However, we have seen an apparent upward trend in the interest in climate change. We gathered insights below on the interest in climate change over time from January 2018 – January 2020. We saw a spike during two time periods. First, when the president withdrew the US from the Paris climate agreement in December 2018 and the highest peak when the September 20 climate strikes were happening. 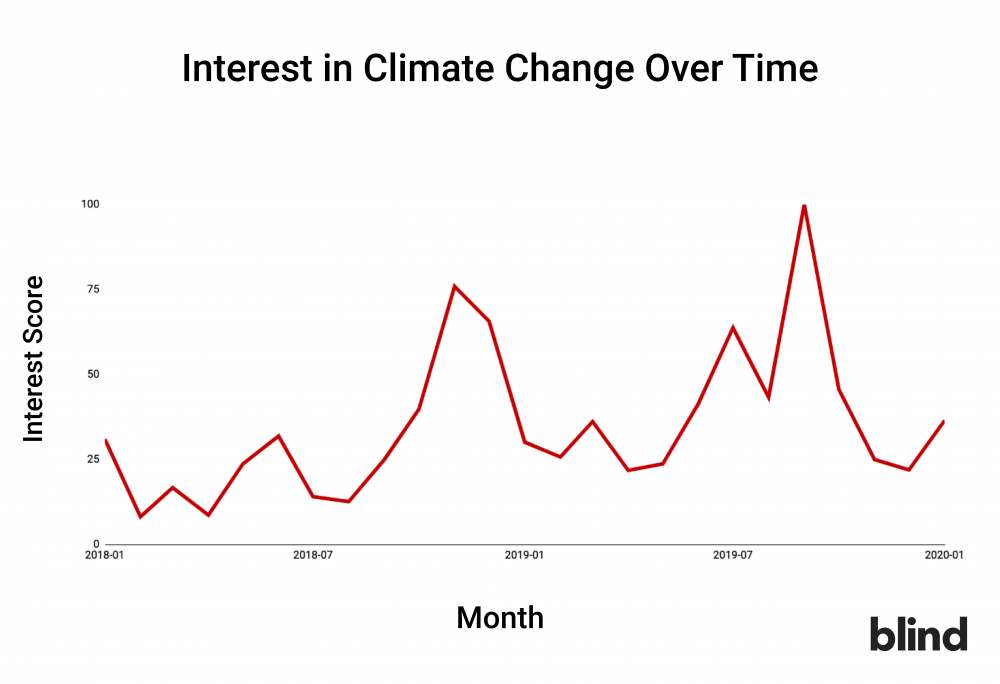 Activism on climate change was led by Millenials and Gen Zs, who are now a massive part of America’s workforce. From our findings, it seems evident that climate change is becoming more than just a political debate for the companies. As more professionals care more about sustainability, will that affect the tech job market’s fight for talent? Our insights suggest, yes.