The peeps who matter at Lyft

Good write up from The Information.

The People Who Matter at Lyft

Below are 104 of the top employees at the ride-hailing company, including operations (the biggest group) and two organizations that are gaining importance within the company—growth and autonomous vehicle research.

Employees at Lyft have watched with glee in recent months as rival Uber suffers from an endless series of dramas. Lyft’s business, meanwhile, has moved in the right direction. The company’s market share has inched up versus Uber in several major cities, while its cost of acquiring new customers has fallen. An IPO is expected as soon as next year, according to people involved in the business, if it continues to narrow its losses.

But as Lyft has grown, nearly doubling its employee count to more than 1,800 from about 1,000 a year ago, it is feeling some of the ill effects of becoming a big company. Decision-making and collaboration are both becoming harder, due to communication barriers between different teams and the growing number of employees who must attend meetings.

THE TAKEAWAY
New power centers are emerging at Lyft including the team focused on signing up more drivers and the growth team focused on the cost of getting more riders and drivers. The newest business, a self driving car development unit, has more strategic importance than short-term value.

Meanwhile, new power centers are emerging. They include the team led by Brian Hsu, who is in charge of boosting the number of Lyft drivers, and the growth team, run by Ran Makavy, which analyzes Lyft’s cost of acquiring riders and drivers. They join other key executives including co-founders Logan Green and John Zimmer as well as CFO Brian Roberts. (See our organization chart above: You can click on arrows and see direct reports for executives two layers down. See an Uber org chart here.)

Both Lyft and Uber are benefiting from an expansion of the ride-hailing market. Lyft still trails Uber by a wide margin: Lyft says it believes its market share nationally is 30% to Uber’s 70%. Uber believes its share is closer to 80%. However, people at both companies privately agree that Lyft’s gains, which were sparked partly by social media outrage directed at Uber, stalled this summer. But Lyft’s share isn’t peanuts: it now handles more than one million rides a day, or more than $10 million in gross revenue daily, based on the average fare. That’s up 150% from 400,000 rides a day about a year ago, said one employee. By the employee’s own projection, Lyft could reach 1.4 million rides a day by the end of this year and two million within the next 12 months or so. Uber, which operates in Asia, Africa, Europe and the Middle East, was recently on track to hit $33 billion in gross revenue in 2017, said a person briefed on the figure.

Mr. Green runs the show at the core ride-hailing business—engineering, product, growth, operations, and finance. The other co-founder, Mr. Zimmer (known internally as “JZ”) technically reports to Mr. Green, but the two men seem to share power amicably and are often seen walking together around Lyft’s headquarters. Chief Strategy Officer Raj Kapoor has referred to the two as a “left arm/right arm” of the same person.

For some business-review meetings, Mr. Zimmer sometimes isn’t present, said one employee. He oversees things such as legal, human resources, government relations and PR, a group totaling around 250 employees. He also is the primary public face of Lyft—making headlines recently when he referred to the company as being “woke.” He also is the main contact for investors during fundraisings—including the most recent $600 million round in April, at a post-money valuation of $7.5 billion. That’s up from $5.5 billion at the start of 2016. He was Lyft’s lone representative at the Allen & Co. conference at Sun Valley, Idaho, last month, hobnobbing with other tech and media CEOs and institutional investors.

The most powerful executive at the company besides the co-founders is Mr. Roberts, the CFO, employees say. His team of number crunchers are in charge of Lyft’s budget planning and trajectory. He is involved in discussions around partnerships, marketing spend, and other areas of the company. (Background about him can be found here.) He oversees around 70 employees. One of his lieutenants, Younggi Choi, a former investment banker, works closely with Mr. Zimmer on fundraising.

By headcount, though, COO Rex Tibbens is No. 1, with nearly 900 employees. Most of those are in customer service, based in Nashville. An additional 300 employees are in operations; they work locally in Lyft’s markets across the country, looking over supply and demand issues. Lyft started in a centralized manner, trying to limit the number of local operations employees, but has recently expanded such roles. (That approach contrasts with Uber, which started with a decentralized approach but has changed course to concentrate more decision-making at its San Francisco headquarters.)

Within Lyft, the newest business unit, a self-driving car development arm, may have more strategic importance than immediate practical value. It was set up in recent weeks as a result of concerns expressed internally by executives such as Mr. Kapoor, the strategy chief, that if Lyft doesn’t get involved directly in autonomous tech, it could get “locked out” in the future and left behind by companies that develop it, according to one employee. Of course, it is too soon to predict how things will play out. And Lyft’s co-founders have argued publicly that human drivers won’t be replaced anytime soon, and that the car-dispatching expertise of Lyft and Uber won’t easily be replicated.

The Lyft self-driving car unit is based in Palo Alto and headed by engineer Luc Vincent, hired recently from Google, where he started and scaled up Google’s Street View service that is part of Google Maps. That’s relevant because detailed maps are a component of self-driving car software, but it will be hard for Lyft to spend even a fraction of the money spent by Waymo and Cruise to develop a full-fledged autonomous system, and it is behind in terms of talent and tech. Curiously, Mr. Vincent hired a head of autonomous car software, Anantha Kancherla, from Dropbox—in other words, Mr. Kancherla doesn’t appear to have prior experience in the field. Mr. Vincent, who oversees about 150 engineers, including some at headquarters and Seattle who don’t work on autonomous tech, reports to engineering chief Peter Morelli.

There aren’t enough cars to meet demand. That’s why Lyft is now looking at ways to gain access to tens or hundreds of thousands of vehicles it could lease to drivers on a short-term basis.
Communication Breakdown

Lyft is coming to grips with the typical pitfalls of a growing workforce. Last week, Mr. Morelli, the engineering chief, who oversees more than 400 engineers, sent an email to much of Lyft’s staff describing broken communication problems across the company and what could be done about them.

“We are actively looking into ways to improve, as communication at this stage of our company is critical to our ability to collaborate and scale. We want to equip you with the information you need to do your work,” he said.

One issue is that different teams use different messaging services. Lyft’s product and engineering teams use Slack, while some in the legal and HR teams use Google Hangouts, said an employee. Mr. Morelli, echoing efforts by Lyft’s “internal communications team,” urged more people to use “Facebook for Work.” That way more workers could get on the same page on company-wide matters, he suggested.

Messenger battles aside, Mr. Makavy, who previously work at Facebook’s emerging-markets growth team, has become a lot more important over the past year. While his team is relatively small, at 80 people or so, he has taken over “performance marketing,” or the way Lyft spendings money on online advertising. Previously that job was handled by Lyft’s marketing team, which now only handles “brand” campaign marketing. Performance marketing is one of the top cost centers for ride-hailing companies.

The cost of acquiring each rider through advertising has dropped below $10 from several times that much. But it still costs more than $200 to sign up a driver, said a person with knowledge of the numbers. Reducing that figure, which has become exceedingly difficult, would help Lyft get closer to breaking even. The company has said it lost about $130 million in the first quarter this year, down from $150 million the fourth quarter of last year.

In the meantime, there is greater emphasis on helping people get short-term car leases so they can drive for Lyft. Helping lead that effort has been Mr. Hsu, who has about 40 people in his org. He is in charge of Express Drive, a successful partnership between Lyft and two companies—Hertz and General Motors—to help drivers lease cars for as short as a week if they don’t own cars themselves. In the markets where the service is available, the program accounts for around 20% of Lyft drivers, said a person familiar with the figures. Overall in the U.S., around 10% of Lyft drivers come from Express Drive. There are several hundred thousand Lyft drivers active per week.

The problem is there aren’t enough cars to meet demand, and there is a waiting list of thousands of people, said a person briefed about it. That’s why Lyft is now looking at ways to gain access to tens or hundreds of thousands of vehicles it could lease to drivers on a short-term basis, this person said. It’s unclear whether the cost of the cars would sit on Lyft’s balance sheet and how it would finance them, but the company is preparing to manage large fleets, this person said. 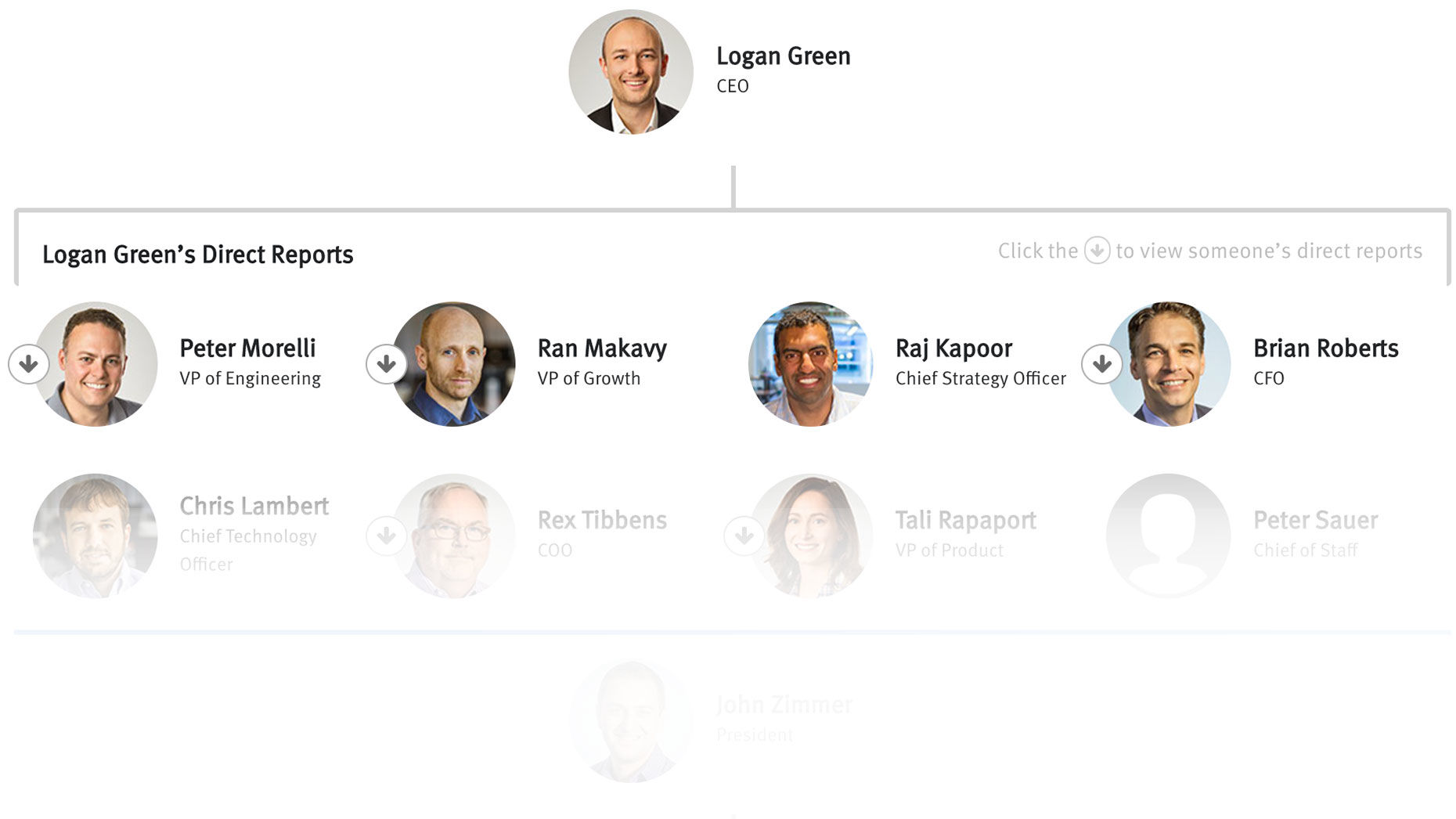 The People Who Matter at Lyft